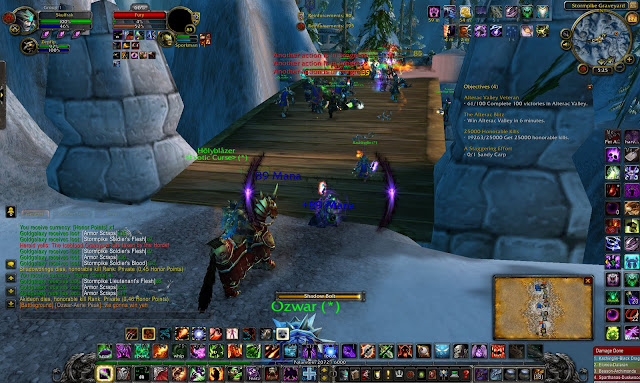 I ran a bunch of AVs on my warlock, Skulfrak, today, and the last one was truly epic. The alliance was waiting for us in Balinda’s room, and that threw everything off.  The didn’t get Galv down, and we failed on Bal, so it ended up turning into a giant battle of attrition, and we were losing by about 100 reinforcements. But, after wearing them down a bit, we finally took Balinda out, and that turned the tide. Suddenly, they were the ones down by 100, and we pushed them all the way back into their camp. They even brought out the Druids of the Fang! I was half expecting them to summon the Ice Lord.  It seemed like it took about an hour, but we finally counted them down, and it was like New Year’s Eve.  So, we actually did some PvP in Alterac Valley, the way it was meant to be. Too bad they’re not all that way! This is why it’s my favorite battleground.