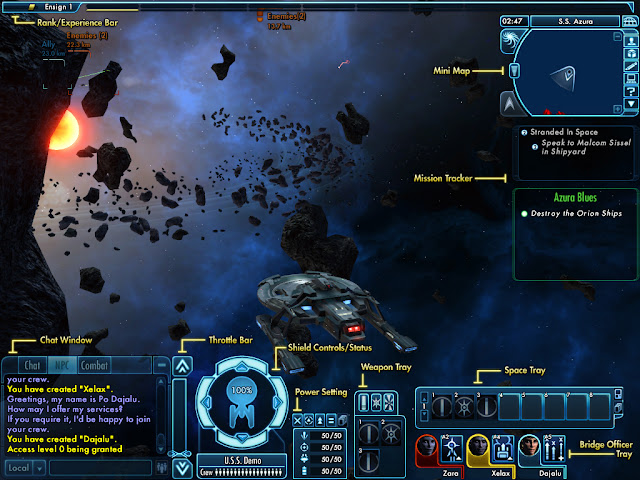 I got Star Trek Online installed and patched fairly quickly.  Here are my initial impressions –

One giant server. From what I can see, all players are in the same space. I haven’t encountered any instances yet.

Character creation was pretty versatile.  Lots of options.  I don’t like that I have to play as the Federation first before I can unlock the Klingon side.  Many races were purchasable through the C-Store, as well as there only being 3 character slots, with more purchasable through the C-Store.  In a free-to-play game, that’s okay, but in one with an active subscription model, showing the player more things you want to sell him that seem like they should be standard choices is not cool.

I made my guy and started the first mission.  Movement was easy.  Interacting and communicating with objectives was not as clear as in World of Warcraft.  I played that game for six years, so I tend to compare things to it, and the expectations from other games is very high.  Combat was pretty easy.  I just hit the fire button over and over again and the game auto-pointed at enemies.  I got stuck in a crouch position and was duck-walking for a while, and couldn’t figure how to get out of it.  The graphics and texture were excellent.  The sounds and feel were good. I saw a few other players running around.

Ship combat was pretty cool.  The graphics are good, but the three dimensions were throwing me off a bit.  It was very easy to wander far away from your objectives.  Again, once you got near them, I just pushed a button to complete things, like beaming survivors over.  It probably gets more complex later on, but it was pretty simple to start with.  There were a few other player-controlled ships flying the same mission, so that’s a good sign.

Yesterday morning, the game was down for maintenance, and I was busy in the evening, so I didn’t make any more progress.

This morning, the game is again down for emergency maintenance, so again, I can’t play.

It has potential, and I think I need to learn the controls better. I can’t do that until I get back in the game, and 2 of my 30 days have been spent offline, which is mostly coincidence. It’s been up in the afternoon and evening, but my primary gaming time is early morning.