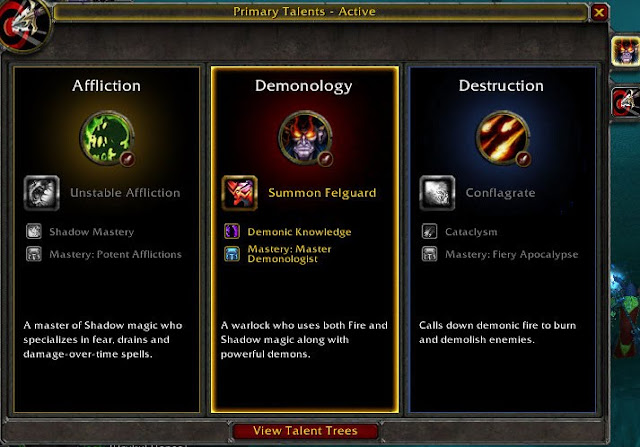 I downloaded the Public Test Realm version of the game, and copied my characters over to try out patch 4.0, which gives us all of our new spells and talents.  Stats work differently now, and there are vastly improved character windows, spell books, and talent trees.  This is not the Cataclysm beta, so we don’t have old zones re-vamped yet, nor can we fly in the old world (you can, however, summon your flying mount as a ground mount in the classic zones).

I spent time on my warlock, using demonology.  Quite a few old staple spells and talents are gone, and there are some new ones to play with.  No more spellstones and firestones.  No more soul shards and bags.  We now have a permanent 3-shard system under our mana bar that empowers certain spells.  But we can summon demons, create healthstones, and summoning portals any time we want without needing shards.  I think multiple ranks of spells are gone, and they all scale as you level now.  Your spellbook shows you clearly what you can learn in the future, and tells you when to visit your trainer, and what to look for.

The Infernal and Doomguard can now be summoned in addition to your normal pet instead of replacing it.  I think it’s bugged, though, as I brought out an Infernal a few times, and even though I had enemies with dots on them, it just stood there, even when I pulled them back to it. 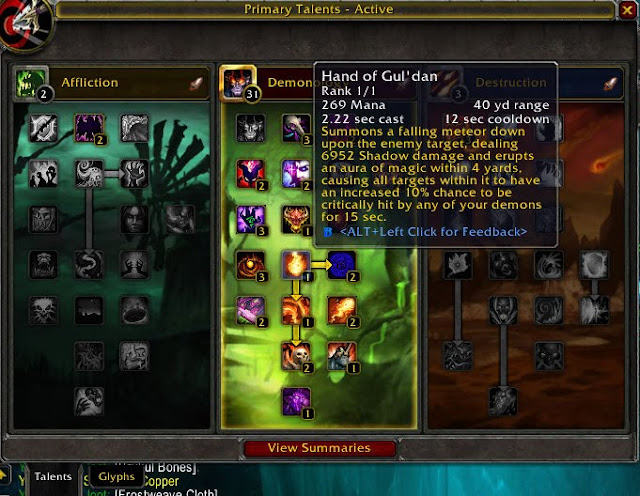 Hand of Guldan is an amazing spell.  Look at those numbers – 7000 damage, and a crit effect with a 12 second cooldown.  Some of the empowering effects are amazing.  I was trying to get the hang of things last night, but I think I’ve got it after playing a little more this morning.  I had to rebuild my interface and all of my macros on the PTR to get things running how I like them. 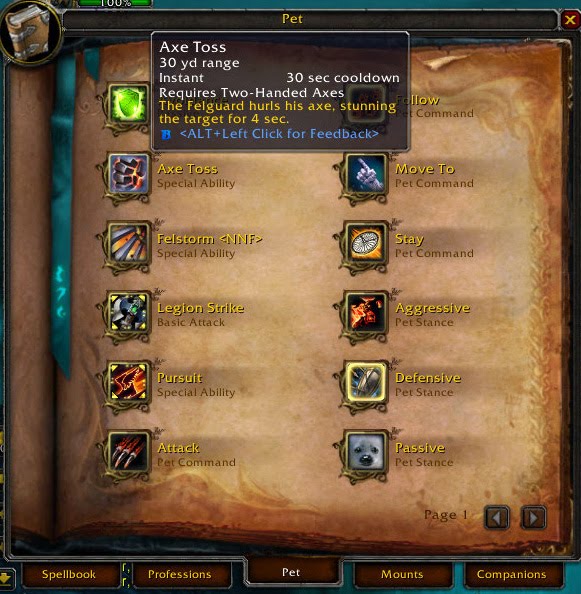 Pets can now be positioned exactly with the “move to” button.  In the spellbook, the Felguard has 2 new abilities. One of them is an ax-toss, which stuns a target at range.  I haven’t even tried affliction yet, or my paladin.  This will keep me busy for a long time, with seven level 80s. 🙂

This will be on live very soon, probably in the next few weeks.  Cataclysm is rumored to be released on November 2nd, so they’ll give us this stuff in advance, so we’re all re-specced and re-acquainted with how to play when the new zones drop.  There are still a lot of bugs, and more changes will happen as they tighten things up, but I think we’ve got a pretty good idea of what it will be like.

I’m guessing that the new 80 to 85 enemies will be extremely tough, because most of us at 80 can lay out a truckload of damage.  We’re only getting five more levels, but they’ll probably be filled with challenges tougher than anything we’ve seen before.

I like what I see so far.  This is pretty much WoW version 2 – the classic game totally re-designed from the ground up.  Everything that works has been made better, and a lot of the crap has been removed.  I’m sure there will be much crying and moaning from the masses about everything under the sun, but I’m betting after the dust settles, we’ll have fun with this game for a few more years.