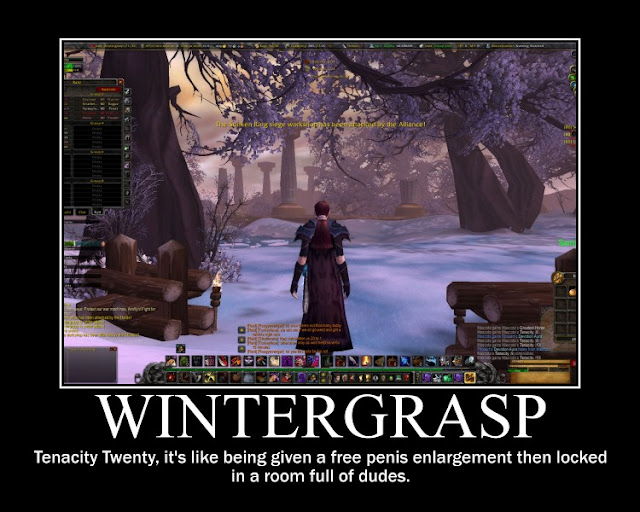 My tauren warrior Squood, on Steamwheedle Cartel US, dinged 78 this morning.  That means it’s time to start collecting some Wintergrasp tokens!

On this realm, the horde is pretty overwhelming.  It usually controls Lake Wintergrasp for most of the day, with the alliance slipping a win or two in the very early morning.  Most of the battles I’ve done end up with the alliance standing in their graveyard, being shot up by the horde like ducks in a barrel.  I’ve played both sides for a long time, and it’s not a lot of fun doing world PvP on the alliance end.

I got a few new two-handed weapons, so I’m making sure my skill is up this time for the Isle of Conquest Call to Arms, which starts tomorrow.  That should easily put me at 80, and give me enough honor for a few more pieces of PvP gear to get me started in heroics.  I’ll probably start off as crappy DPS in fury spec, because there’s no way I can hold aggro against some of the 6000 gearscore equipped damage monkeys as a fresh 80.

Next up, I want to go back and finish off the handful of dungeons I missed while leveling, so I can get the dungeon-master achievements for each of the brackets.